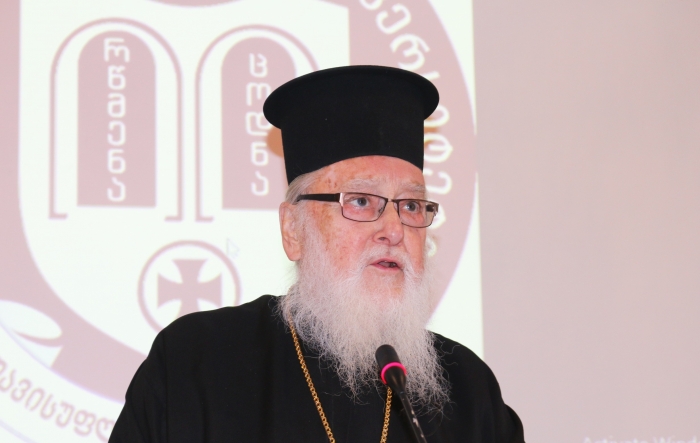 The Most Reverend Kallistos, Metropolitan of Diokleia (Timothy Ware), was born in Bath, Somerset, England at 1934. He was educated at Westminster School (to which he had won a scholarship) and Magdalen College, Oxford, where he took a Double First in Classics as well as reading Theology.

In 1958, at the age of 24, he embraced the Orthodox Christian faith (having been raised Anglican), traveling subsequently throughout Greece, spending a great deal of time at the Monastery of St. John the Theologian in Patmos. He also frequented other major centers of Orthodoxy such as Jerusalem and Mount Athos. In 1965 he was ordained to the Diaconate, and in 1966, to the priesthood and was tonsured as a monk, receiving the name Kallistos. In the same year, he became a lecturer at Oxford, teaching Eastern Orthodox Studies, a position which he held for 35 years until his retirement. In 1982, he was consecrated to the episcopacy as an auxiliary bishop with the title Bishop of Diokleia, appointed to serve as the assistant to the Bishop of the Archdiocese of Thyateira and Great Britain. Despite his elevation, Metr. Kallistos remained in Oxford and carried on his duties both as the parish priest of the Oxford Greek Orthodox community and as a lecturer at the University. Since his retirement in 2001, Metr. Kallistos has continued to publish and to give lectures on Orthodox Christianity, travelling widely. Until recently, he was the chairman of the board of directors of the Institute for Orthodox Christian Studies in Cambridge. He is the chairman of the group Friends of Orthodoxy on Iona. He is the Chairman of the Anglican-Orthodox Theological Dialogue. On 31st March 2007 he was elevated to Metropolitan, by the Holy Synod of the Ecumenical Patriarchate. Metropolitan Kallistos is perhaps best known as the author of the book The Orthodox Church, published when he was a layman in 1963 and subsequently revised several times. More recently, he produced a companion volume, The Orthodox Way. But his most substantial publications have emerged from his translation work. Together with G. E. Palmer and Philip Sherrard), he has undertaken to translate the Philokalia (four volumes of five published to date); and with Mother Mary he produced the Lenten Triodion and Festal Menaion. He has also co-authored, edited, and translated other works.